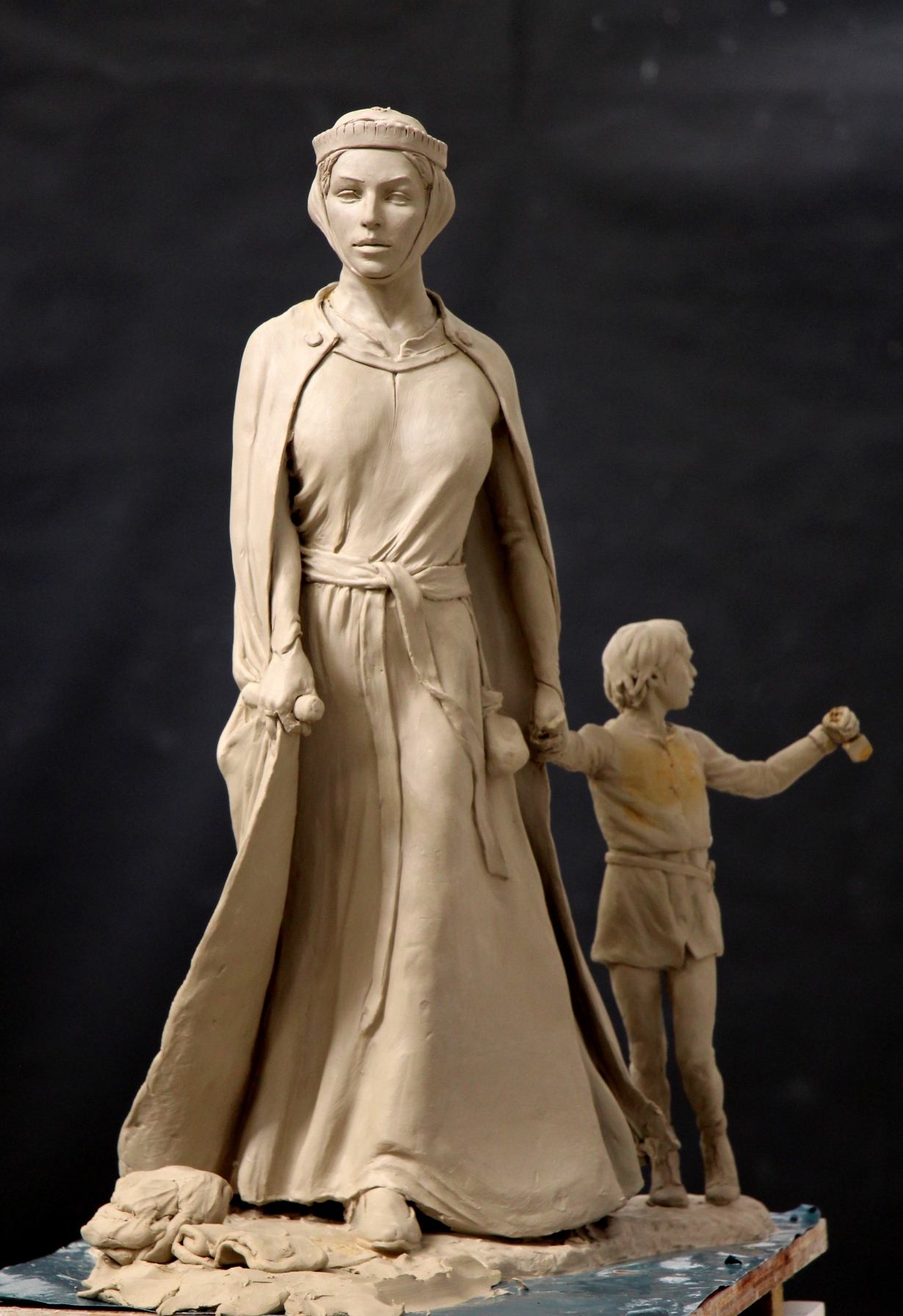 The Project and Messages

Licoricia has been described by Robert Stacey as ‘the most important Jewish woman in medieval England’. The sculpture will be a beautiful addition to Winchester in its own right, acting as a gateway to medieval Winchester, its Jewish community, and its royal connections.  Depicting a successful businesswoman of the time, it will act as an inspiration to women of today and also promote tolerance and understanding in our society. It will be a gateway to a new world of discovery about Winchester’s and England’s royal and medieval past.

The project has important educational objectives, which will use the statue as their focal point. Both are described below.

What’s the purpose of the Project?

Licoricia was a prominent member of Winchester’s medieval Jewish community. Her statue will:

What are its messages?

Sculpted by top sculptor Ian Rank-Broadley, it will be a life-size bronze and depict Licoricia with her youngest son, Asher, at about five to six years old, holding her hand.  There are no known illustrations of Licoricia and in any case, pictures created at the time showed rank and occupation rather than being accurate portraits, so the sculptor has used as his inspiration his daughter and grandson, both of whom are Jewish.

Licoricia will be wearing the clothes worn by a wealthy woman of her time.  Careful research has gone into her clothes and headdress, with input from the Victoria and Albert Museum, and the Jewish Museum in London.  Although at that time, Jews and Muslims were required by the second Lateran Council of 1215 to wear distinctive dress – interpreted as a tabula (a badge shaped like the Ten Commandments) in England for the Jews, she is not wearing one as wealthier Jews paid for the privilege not to.  In Licoricia’s right hand will be a tallage demand. Jews were tallaged (taxed) increasingly harshly and sporadically as the thirteenth century progressed, with demands often being accompanied by imprisonment. On the death of her husband, David of Oxford, Licoricia was forced to pay thousands of pounds to the King, which helped build Westminster Abbey.

Licoricia’s son Asher is also depicted in mid-13th century clothes.  In his hand is a dreidel, a spinning top.  The top and letters relate to the dreidel game (thought to derive originally from the Roman game of Teetotum) which is usually played at the Jewish festival of Chanukah. Asher was the second son of Jacob and Leah (Genesis 30:13, which reads: ‘Leah declared, “What a fortune!” meaning “Women will deem me fortunate.” So she named him Asher’).

Licoricia is seen purposefully walking ahead – a woman with much to do and complex issues on her mind – whilst also holding on to Asher’s hand showing her commitment at the same time to her family.

The plinth will have the words from Leviticus 19:18 (‘Love thy neighbour as thyself’) inscribed in both English and Hebrew.  The English will be from the King James version of the Bible as large parts of this Bible were translated in Winchester. The font will be Albertus. Albertus is a typeface which Berthold Wolpe created in the 1930s, before he emigrated from Germany to England in the face of antisemitic persecution. The font is named after Albertus Magnus, who participated in the trial of the Talmud in 1240, and was a German philosopher and theologian. His writings are considerably influenced by Moses Maimonides, the Jewish philosopher. Albertus was used as the font for many British coins and can be found on the street signs in several London boroughs, as well as Winchester. The Hebrew font used will be inspired by a 12th century Anglo-Jewish text, Codex Valmadonna I.  Codex Valmadonna I, a Humash or liturgical Torah, remains the only extant Hebrew Humash dated to medieval England. Although Deuteronomy, Job, and other sections do not survive, Codex Valmadonna I contains rare biblical texts, including Targum Sheni and Targum Ruth. The original scribe wrote on the final page:  “Finished the Hebrew Humash, Targum, Haftorot, Hamesh Megillot and Job on the 15 Tammuz 4949 (July 9, 1189).” This date places Valmadonna I at the heart of the Jewish persecution in England (1189–1190), which accompanied the coronation of Richard I and the Third Crusade.

As Suzanne Bartlet writes in her book ‘Licoricia of Winchester’, Licoricia is the story of one woman in the thirteenth century living not only within her Jewish community, but alongside her Christian neighbours in the old capital of Winchester.  Her life and that of her family reflect the experiences of the Jews of medieval England during the century that ended with their expulsion to the continent, and with it the story of Jewry in this country, until their return in the seventeenth century.

Following a competition involving sculptors both local and national, the commission was won by Ian Rank-Broadley FRSS.  Ian is a multi-award winning sculptor with many important commissions to his name.  These include, the Armed Forces Memorial at the National Memorial Arboretum, the effigy of HM Queen used on all UK & Commonwealth coinage 1998- 2015, and a commission for a statue of Diana, Princess of Wales for TRH Duke of Cambridge and Duke of Sussex for Kensington Palace.

Photographs of part of the Armed Forces Memorial and the effigy of the Queen on UK coinage.

Ian has kindly given permission for us to use photographs of the sculpture. We have the enthusiastic support of both Hampshire County Council and Winchester Council in the project.

In November 2020 we commissioned Ian to sculpt the life-sized statue. It is now being cast into bronze and we hope to unveil it in Spring 2022.

The author, Rebecca Abrams, is a teacher, and literary journalist.  She was recently the Writer-in-Residence at Brasenose College, Oxford,  a long-standing tutor on the Masters in Creative Writing at the University of Oxford, and a regular literary critic for the Financial Times.  Her most recent books were ‘The Jewish Journey: 4000 years in 22 Objects’ (Ashmolean Museum, 2017), and ‘Jewish Treasures in Oxford Libraries’ printed for the Bodleian Library, and listed for the Wingate Prize. We hope to publish the book in 2021. We hope to publish the book in early 2022.

The leaflet will be be stocked and distributed through the Library, Winchester tourist sites such as the Westgate Museum and Great Hall, the City Museum and tourist information services, as well as being used as a marketing tool.  It will be a very important element of our educational work, and will accompany the statue.

Future plans include an academic symposium, a larger exhibition on the medieval Jewish community of England, further educational material for schools (please see below for lessons), lectures and activities.

Working with Hampshire County Council, we have already almost completed two Key Stage 3 lessons to be made available free of charge to Hampshire secondary schools by the start of the academic year 2021/2022. As far as we are aware, this project is unique.  We aim to commission further lessons for Key Stage 1 and 2.

Professor Miri Rubin of Queen Mary College, London, and President of the Jewish Historical Society of England, and Rabbi Jonathan Romain of Maidenhead Synagogue, are helping us by reviewing the lessons before publication.

These lessons will cover our aims and in addition, will educate in disciplinary thinking in history, and develop young people’s knowledge of disciplinary concepts and processes in history.   They take the form of a Powerpoint presentation, and include teaching and learning classroom materials, and lesson plans.

We are working with other schools to develop their curriculum and are keen to help more to do so, as well as developing material for download from this website.

The Licoricia story is rich ground for lessons in that it facilitates enquiry into history, identity and culture, prejudice, sources, and geography.

The statue itself is a fascinating enquiry into costume. Licoricia carries a tallage demand and her son Asher a dreidel. She does not wear tabulae because she would have paid not to.

The plinth carries important messages about shared texts between the Abrahamic faiths, in a font developed by a refugee, and in a translation which was at least partly undertaken in Winchester (the King James Bible).

The history brings into question the veracity and bias of sources, and the evidence outside these sources. Amazing artefacts exist such as manuscripts, tombstones, buildings, tokens and utensils such as the Bodleian Bowl. There is even poetry. It further facilitates enquiry into church and state, and medieval prejudice.

Geographical knowledge is assisted on a macro scale by the widespread distribution of Jews throughout Britain, and their links with France and beyond; the studying of people and place has an excellent case study in Winchester, which retains a streetplan which can be traced to the Romans and Saxons, and contains many medieval buildings. We can tell where Jews lived and were buried because medieval Winchester is one of the best documented and researched cities anywhere.

Looking at today, lessons can investigate the nature of modern prejudice and how it is influenced by the past, as well as looking at the importance of education and gender equality. We wish to celebrate and promote diversity, and this can be done through examining how minorities such as the Jews enriched society then and do so now.

Please contact us if we can be of help in developing educational resources or facilitating visits.

We expect our work to reach many hundreds of thousands of people.  Our lessons will be taught to Hampshire’s pupils and further afield, and once Covid has receded we should be able to reach many of Winchester’s 5.4 million annual visitors in addition to the 1.8 million residents of Hampshire.  Locally we are well supported by our local councils and many organisations as well as the local media.  Nationally we have support far and wide including from the national press.  We are working with all these organisations to maximise our impact.

The library, which receives 600,000 visits per year, is accessible for disabled people and has disabled lavatories and a cafe. It is next door to the popular Theatre Royal.

We are making special efforts to ensure that the project is publicised and accessible to everyone, making it fully inclusive. Inclusivity will be helped by location: a large majority of 5-15 year olds visit a library each year together with over a third of adults (more women than men), including 30% of people in lower socio-economic groups and 45% BAME groups.

We are working with many organisations to maximise our impact, including:

Please also see ‘The History of the project and the time’.